Honoring, with portraiture, Clara Barton "The Angel of the Battlefield."

Clara Barton was one of the first woman leaders whose portrait I selected to paint for my "A Tribute to American Women Leaders," project.

She is so exceptional and important to our American history thru her nearly 70 years of selfless service to our country and humanity.

She began teaching at the age of 18, later moving on to a job as recording clerk at the US Patent Office. Even in those early years she was an early women's rights advocate demanding equal pay to men.

In 1861, when the Civil War broke out she quit her government job and started her long career serving as a nurse in aiding people in times of war and disaster.

As the "Angel of the Battlefield" she helped to transport supplies for the Union army and was at every major battle in Maryland, Virginia and South Carolina. She also helped prepare and guide slaves for their new lives of freedom.

After the Civil war, Clara helped locate missing soldiers and mark thousands of graves. On May 21, 1881, she formed the American Red Cross. She was devoted to helping the poor and homeless and an ardent supporter of women's suffrage. In 1904 she established the National First Aid Association of America. She was inducted into the National Women's Hall of Fame in 1972.

As part of this project, "A Tribute to American Women Leaders," I have recorded the development of each oil on linen portrait. I thought this would add more  viewer engagement with the subject, the portrait and the portrait progress.

As usual, I begin my portraits with a oil paint block in, just to get a base of color down on the canvas, upon which I will build up layers of paint. At this point, I am not concerned with the likeness during these early stages, as with the building up of layers of paint the facial structure will begin to form and the features will fall into place.

Below,  the oil portrait is further along, but still needs  more layers of paint to convey the skin tones and the vibrancy and richness  of the colors.
One of the important evocations I wanted to show in my portrait of Clara Barton, was not only her strength, but also her sensitivity and humanity. Below is a cropped version of the final portrait, which I hope conveys these qualities. 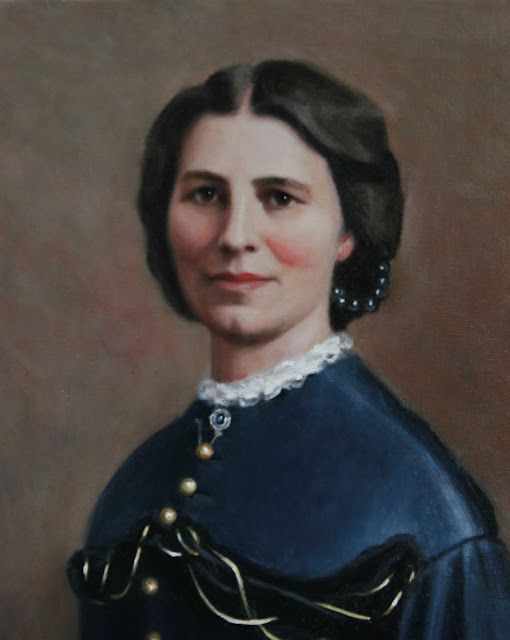 Below is the reference photo I chose to use for the portrait.

I liked this image as it conveyed Clara's dignity, strength and conviction. Also, because it was not as well known a photograph and showed a nice angle of her face (she had a very wide face so a 3/4  pose head position was more attractive, rather than straight on).
I liked that she was standing, so straight and direct...she was a woman of energy and action!

I cropped the photograph, as by removing the lower part of the dress in the photograph the viewer would be more focused on Clara's head and shoulders. Also, in this tribute project, I have restricted the portrait sizes to 14 x 18 to 20 x 24 inches, so I wanted to make sure that her head was large enough for the portrait composition.

To learn more about my  "A Tribute to American Women Leaders" project visit this post on my blog:

For more information, to contact me or to see more of my portraiture, please visit my website:   www.susandurkee.com

Thank you for taking the time to read this honorary blog celebrating such an important American woman leader.

Posted by Susan Boone Durkee Portraiture at 8:38 AM