A good portrait not only captures a likeness, but the person’s spirit, says Susan Durkee of Redding, adding, “It is that sense of spirit that viewers respond to, that gives them pleasure when they look at it.”

A lifelong artist — “I’ve been painting since I was six” — she believes painting a portrait is a huge responsibility, and a great honor. “You are creating immortality for someone, capturing a person someone loves. There is a spiritual nature to it,” she continues. “I’ve developed an awareness as I’ve matured that is making my work better. The more you can be open, truthful, peaceful, the more the work flows; it comes through you, the thought goes through your hand, almost like you’re an instrument, to capture the likeness and spirit.
“In the last few months I have come to understand that it is really all about love; you feel the love people have for the subject, hear good things about them. The more love and positive energy I have, the easier it is to create something that will live, people will love; it becomes part of the family, an heirloom.”

The award-winning artist usually works from photographs, combining elements and interpreting them, incorporating things that are personal to the subject. “A portrait is human expression of a human being; an interpretation and expression of love and knowledge; a photo is flat, doesn’t have the warmth, richness of color, the structure that comes from building layers of oil paint; plus canvas breathes…”
Possessing an effervescent personality and a self-described people person, Ms. Durkee readily acknowledges the contradictory nature of what she does. “It is lonely work; all that time, looking, measuring, mixing and working colors — if you lose a tangent of accuracy, then it’s all off — but you don’t feel alone. And if you don’t like people, you can’t do it well.”
She is self-trained for the most part, noting, “People can be taught basics, techniques, but you learn by doing. Copying the works of great painters is like learning a language and enables you to develop your own style. Frans Hals has great brush strokes, as does John Singer Sargent. Velazquez is the best, but Sargent is the artist whose approach to painting I most identify with, especially when he talks about working the mass.” 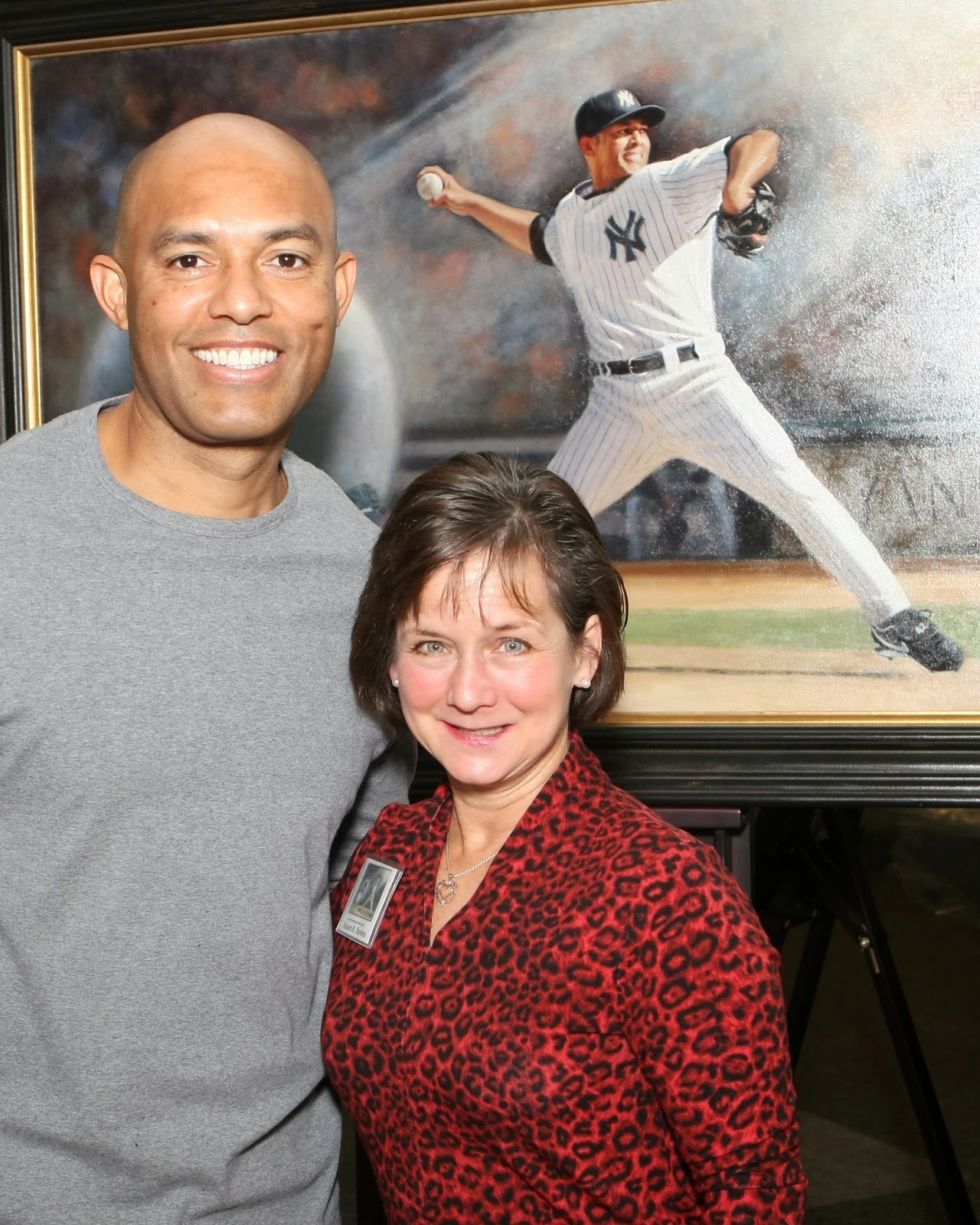 Artist Susan Durkee  with retired New York Yankees Closer Mariano Rivera in front of  her  double portrait of him  at  a  recent fundraiser in Ridgefield,  Ct          Photo Credit Joe Heinzmann

I feel like I was directed here. I had painted Twain before I got here — he has such an interesting face — but I was slowly drawn in. When you live on a property once owned by someone like that, you’ve got to learn more about him.” Calling herself a Twainiac,  she opens her home to and shares knowledge with Twain scholars and fans.

While she paints still lifes, animals and landscapes — her print of Redding’s Congregational Church with sheep on the green can be found in many local homes — it is portraiture to which she devotes most of her time. Her work comes through a combination of commissions and speculative paintings. “I have a pretty good web presence and encourage people to come to my studio. You have to have examples to show people, plus you have to keep working.”

It generally takes two to three months to create a portrait, and she usually works on three or four simultaneously. She is currently working on a commission for Choate Rosemary Hall, two young ladies from Greenwich, whom she had previously painted as youngsters, and completing a speculative portrait of retired Supreme Court Justice John Paul Stevens. “I want to do Justice Sonia Sotomayor next.”

A lot of portraits “look like chalk; they don’t feel alive,” she notes. The reason can be seen in the eyes. “The eyes are what give a portrait life, so much comes through them as you build up the values. The final step, what makes the portrait come to life, is the catch light, the white touch. It is kind of scary — suddenly the person is looking at you. The catch light has to be exactly placed; if it is off a sixteenth of an inch, the portrait isn’t right. Once I’ve placed the catch light, the portrait is 95 percent done.”
At that point, “I like to encourage people to see a painting as it nears completion and let me know if they feel something isn’t quite right so I can fix it and know they are totally happy with the result.”

And while the eyes are key, “The mouth is the hardest feature to get right; it is so soft and subtle… think of the Mona Lisa, the subtlety is what makes it so intriguing.”
Ms. Durkee recently had the pleasure of showing her speculative double portrait of retired Yankee closer Mariano Rivera to the subject when he was in Ridgefield for a fund-raiser for lights at the new Tiger Hollow practice field and for Mr. Rivera’s church in New Rochelle, N.Y., el Refugio de Esperanza — the Refuge of Hope.
“He is such a kind and gracious man, and very religious and spiritual; his wife is a minister. It was easy to paint him in that everyone loves him; he’s such a great guy. And it was a real kick watching people get their pictures taken posing with the portrait.”
Created by combining elements of seven photographs, one portrait shows Mr. Rivera as a young man starting out, upper body and head with glove visible, and the other shows him full body on the mound at the end of his career throwing his cutter; he is bathed in a stream of light, reflecting his spiritual nature. She created a limited edition of 250 prints of the portrait, a small stack of which she brought to the event. All the prints Susan brought quickly sold out, including many that Mr. Rivera  signed and resold  for the fund-raiser.

Posted by Susan Boone Durkee Portraiture at 10:25 AM No comments: