Filming a "Mark Twain" Documentary at The Lobster Pot

Another day of filming for the Documentary,

“Isabel seems at ease. We know there are secrets hidden behind that smile: The Clemens family secrets and her own. She took most of those secrets to the grave. This was her public face. The one she wanted everyone to see. And if those are Twain's dead wife Olivia's stones hanging about her neck she was confident in her position with Twain to wear them in public. It was only Twain's daughter Clara who complained about Isabel wearing her mother's jewelry.  This oil painting is based on a photograph of Isabel taken on December 21, 1908 by Alvin Langdon Coburn at Stormfield, Mark Twain’s last home, and may represent her last moment of calm.  She married Twain's business manager Ralph Ashcroft in March 1909 and the next month Twain fired her for "high crimes and misdemeanors".

This 24 x 30 oil on Linen painting of Isabel Lyon was created by portrait artist Susan Boone Durkee.  Isabel Lyon was Mark Twain’s companion, household manager and social secretary for 1904-1909. Twain also granted Isabel, for a period of time, Power of Attorney over his affairs. Coincidentally, Susan lives on the property called The Lobster Pot, which  Mark Twain  gave to Isabel Lyon as a  Christmas gift in 1907.

The relationship between Isabel Lyon and Mark Twain has basically been kept a secret for nearly 70 years. How can that be? Here is a woman about whom Twain himself said he knew most intimately in all the world -- with the exception of his wife, Livy. Mark Twain first met Isabel Lyon in 1892, when she was 29 and working as a Governess for a family. He encountered her at a party while he was playing charades, and he was so charmed by her that at the end of the evening, when invited to return, he replied: “I’ll come only if I can play with the little Governess.”  When Isabel Lyon first came to work for the Clemens family in 1902, Twain described her as “slender, petite, comely, 39 years old by the almanac, and 17 in ways and carriage and dress.” A charming woman, hard working and competent she soon took responsibility for the entire Clemens household.

After Livy’s death in 1904, Isabel became Mark Twain’s secretary, bookkeeper, household manager, social companion, literary critic, and holder of his power of attorney. For a period she lived at Stormfield with Twain.  Supposedly her bedroom was next to his and her office was located just  left inside Stormfield’s front hall.

Intelligent, and sensitive, Isabel worshipped Twain, referring to him as “The King.” He, in turn, called her “The Lioness.” Isabel staggered under the demands that Twain placed on her. As Twain described her,  “Miss Lyon runs Clara, and Jean, and me, and the servants, and the housekeeping, and the house building, and the secretary work, and remains as extraordinarily as competent as ever.”

Although it is said that Isabel had designs to marry Twain, she ended up marrying Twain’s business manager, Ralph Ashcroft, in 1909.

It was an unhappy marriage and ended in divorce in 1920. There is no evidence that ever betrayed Twain, even though she was paid poorly and treated badly at the end of her service -- Twain even took back the “The Lobster Pot,” her  “darling house,” which he had given her as a Christmas gift in 1907. Still, Isabel remained devoted to him. Many years later, she would refer to the situation as, “we had a falling out.” A young actress friend, Joyce Aaron, who lived next to Isabel when Isabel was in her mid-nineties and living in , told this to me.  What really happened between Twain and Isabel? Was it Clara’s jealous prodding? Was Twain jealous that she married Ashcroft and bruised his ego? Did Isabel really try to steal from Twain? Was Albert Bigelow Paine jealous of her control of Twain?  Did Mark Twain just lose interest in her companionship or did Isabel know too many of the family secrets?

We may never know for sure.  So why has this relationship been kept hidden?

After Twain died, Clara Clemens and Albert Bigelow Paine removed virtually all record of Isabel Lyon’s existence. Twain's image was the utmost importance. So as far as the public was concerned, Isabel Van Kleek Lyon never existed.  Isabel died in 1958 at the age of 95. She willed her diary and photos to the Mark Twain Papers collection at the of , , with the condition that they not be open to the public until after Clara’s Death. So I guess you can say that after Clara died, Isabel was reborn.

We all owe a lot to this woman, Isabel Lyon. Because of her diligence in keeping a sequence of detailed daily journals and photos the last years of Mark Twain’s life can now be better known to all. 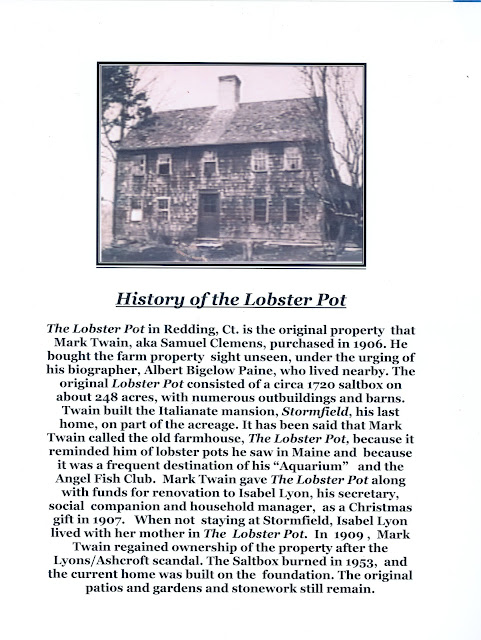 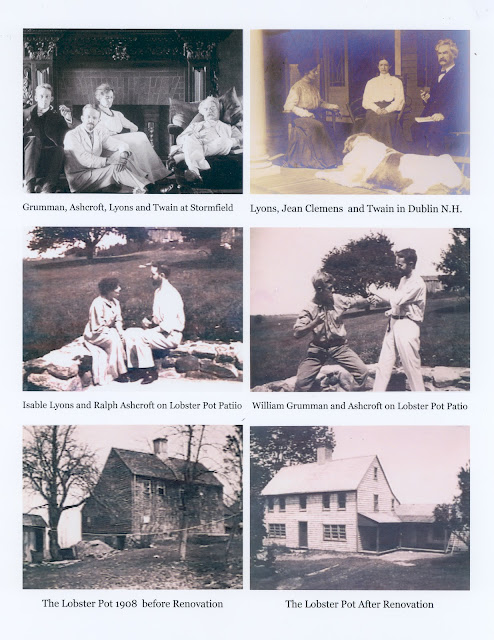 ﻿
Posted by Susan Boone Durkee Portraiture at 2:20 PM No comments:

Mariano Rivera's Portrait is finished! The Greatest closer of all time is captured in a double portrait

﻿﻿ ﻿ I really enjoyed creating this portrait of such a legendary individual, not only on the field as one of the best Pitcher/Closer in Baseball history, but also as a wonderful person.

When ever I mentioned to a client that I was painting a portrait of Mariano Rivera, the first words of comment where what a "spiritual"quality human being Mariano is. Consequently, from the first planning of the portrait to the final touches I had this wonderful warm creative inspiration....﻿

I choose the double portrait format because I felt this would give an intimacy with the viewer in the close up portrait vignette  and in the action pose I was showing Mariano doing what he does best on the field...closing the game and throwing his famous "Cutter".

In laying out the composition I worked from a composite of 7 different photos. I felt it was very important to add the strong light coming from above right to symbolize  Mariano's strong religious and spiritual beliefs.

I also painted Mariano's actual glove shown in the portrait vignette shows the words Phil: 413, a biblical passage which says: " I can do all this through him who gives me strength". 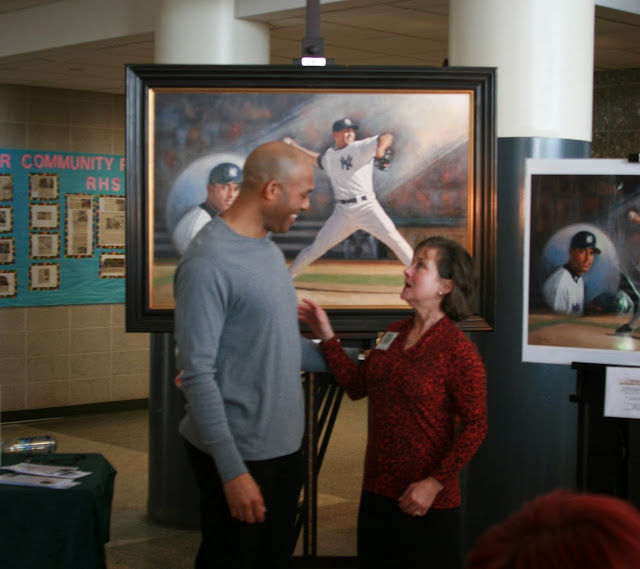 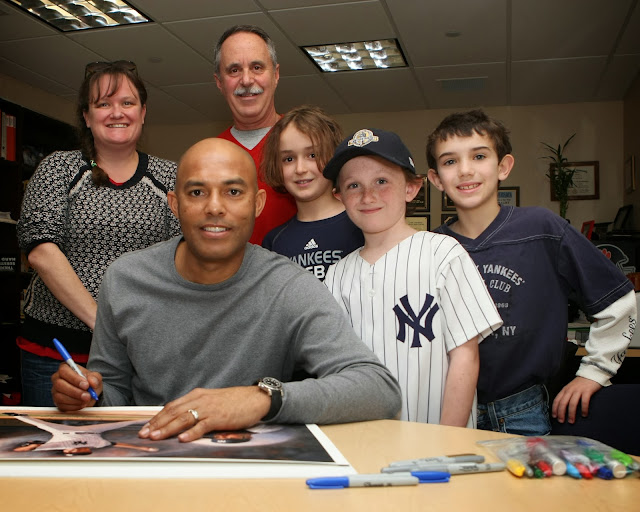 
Shipping and handling, and tax extra 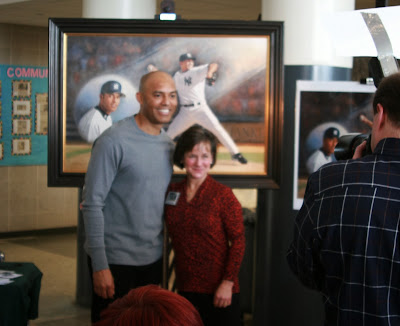 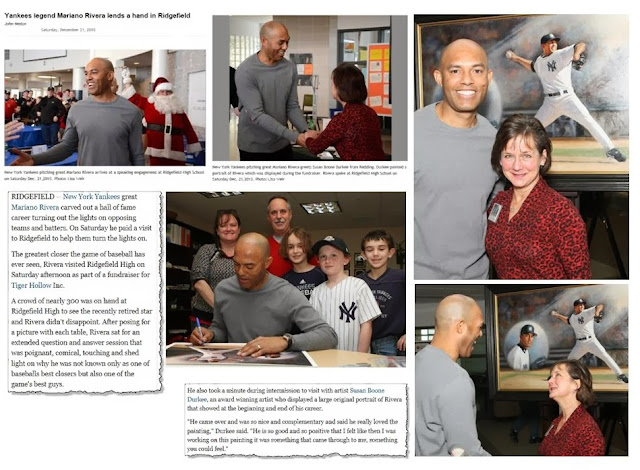 
To meet the Artist and visit The Lobster Pot Studio, please click on the link below to see a delightful 4 minute film created by PBS Director/Producer James Nicoloro

Posted by Susan Boone Durkee Portraiture at 8:59 AM No comments: